As a woman, it is one of the things I hate most.  Car repairs. I hate not knowing the inner workings of my old Corolla friend. I hate feeling taken advantage of because of my ignorance. But mostly, I hate being stranded when things unexpected go wrong. This is where our story picks up.
I was on my way to the third house of the a progressive dinner at church when a pothole suddenly lunged from the median, swallowing my front driver’s side tire.
I hit it hard and I hit it square.

I turned off the radio to hear for clues as to just how much damage had been caused by the insidious, lurking pothole. It didn’t sound normal. I found a place to safely pull to the side of the road and got out to see if my eyes to ascertain the level of damage better than my ears. My hub cap was badly scraped, as was my tire. I did what all women do in such a situation – I kicked the tire. I’m not quite sure where we get this from, but it is somehow instinctive.  The tire seemed to be holding air – even with repeated kicks (at least as forceful as I could muster in dress shoes). So I continued to the final house of the night to get an expert opinion.
After arriving, eating desserts, and playing a few games, the evening was drawing to a close. I asked one of the guys to follow me out to my car and assess the damage from a male perspective (which would probably utilize something much more useful than a kick). I pride myself on being very independent. In some sense that is both the blessing and the plight of a single woman. I have a job, pay my own bills, and am responsible for myself. But it also means that I dislike asking for help. A good friend of mine often reminds me that a knight can’t show his bravery when the damsel won’t admit her distress! So I thought it was a big step for me to even ask for help.

The gentleman agreed to be “knightly” and check on the state of my car, but as we arrived at my car, it didn’t take an expert eye to recognize a completely flat tire. Drat! But before I even had time to bemoan my pothole predicament, this man had called two more guys out to begin the task of replacing the flat tire with my spare. All I did in the entire exchange was pop my trunk for them. Tires, jacks, wrenches, flashlights, bolts, and air pressure gauges flew out of secret hiding places I did not even know my car had! As I stood, admiring the skill and helpfulness of these men who were assisting me out of a bind, I felt loved and taken care of – something I often miss as I am so focused on being independent and forging my own way. There was something deeply feminine about needing assistance and something strongly masculine about the help being offered freely. I could have kicked off my heels, cranked the jack, and helped loosen lug nuts, but I didn’t have to. And I really appreciated that. It was beautiful to me to see my brothers in the body of Christ go out of their way to assist me. 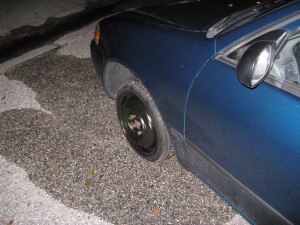 After a short period of time the flat tire was resting in my trunk (it’d had a hard night and was tired) and the sad looking spare was on in its place. Then we realized that my spare tire was also low on air. I suppose that is to be expected after riding around in a secret compartment for ten years in the heat of Florida, but it was disappointing nonetheless. So instead of sending me on my way ten pounds of pressure short, two gentlemen offered to follow me to a nearby gas station, and then proceeded to fill up my spare to its appropriate pressure and follow me home — at 40 miles per hour – to make sure I made it home okay. I didn’t deserve their kindnesses. Not only did they perform all steps of the needed transaction to get me safely home, but they did not make me feel guilty or inferior for even helpless for needing help. They were gracious and all I could do was accept. I didn’t have the knowledge or strength to do the job on my own, I only had to receive what they freely offered. And that worked out better because I was able to learn to receive help and these men were able to fix the situation and feel a sense of accomplishment in their work. How much better when we rely on each other instead of flying solo!

And that got me thinking about how the guys who helped me gave me an object lesson from God.  Like the “knightly” men did, God freely offers grace. He is strong and loving and cares for his family. He desires to help and see his work carried through to completion. He takes care of those who need help. He loves deeply, understands our weaknesses, and desires us to be dependent upon him, not independent to a fault. He offers grace, our job is to accept it.

My weekend was full of provision in the most unexpected of ways and I am so thankful to all to stepped up and not only dealt with the details of flat tires, but also gave me a beautiful and powerful picture of God’s masculine care for his beloved. The more I thought about the situation, the more I realized that it was the gospel in miniature. That is why I entitled this post: “The Pothole Gospel.” So perhaps I shouldn’t hate car repairs so much after all. They might just be an opportunity to see the gospel in unexpected, every day situations.