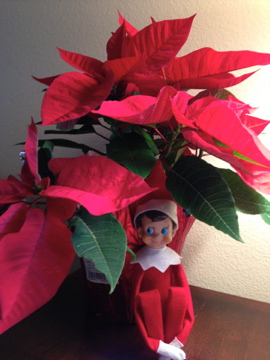 He’s my Elf on a Shelf. I took one look at those shifty eyes and crooked grin and knew he was impish. Worthy of the name Cheeky! My friends Sara and Stephanie bought him for me last Christmas, but I didn’t get him until January so this year is his debut. If you don’t know the story, here’s my synopsis. The Elf comes to your home and spies on your kids. Then he reports back to Santa how they’re behaving. The kids aren’t allowed to touch the Elf or he loses his magic. Kind of a creepy story, right? Why would we willingly invite a spy into our homes? It’s strange sometimes to read kids stories as an adult, eh?

I instituted the Adventures of Cheeky just after Thanksgiving this year. I started hiding him and then my roommates caught on – slowly escalating the hiding places. The rules were simple: Cheeky hid somewhere around the house. Whoever found him, hid him next. He became increasingly brash – truly living up to his name.

Come along for a week’s worth of Cheeky’s adventures!

PS – Cheeky comes in girl form too. I know you couldn’t sleep tonight until you knew that!