Two weeks out from the Disney Princess Half Marathon and things are not looking great. My scoliosis combined with increasing from 5K distance to half marathon distance and unwillingness to stop has left me with several angry joints needing a little TLC. I’ve sought the experts in the field, been fit tested, filmed running on a treadmill, and changed my gait pattern to alleviate joint strain as much as possible. It’s working slowly, but my milage is rather pitiful, especially for two weeks out.

But I knew it would be okay, my friend and prime cheerleader, Tracy would be by my side through the race to get me through. 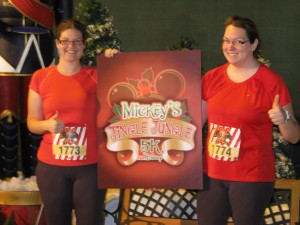 Until I got this dreaded phone call. Tracy was the passenger in a car on her way to a Superbowl party when the car was hit simultaneously totaling the car and dislodging the scalding hot crockpot of chili (braced by Tracy’s feet) burning her right leg and foot significantly. Tracy is okay. Nothing is broken. All parties walked (hobbled) away from the crash. Things could have been much worse. But of all the absurd injuries! She literally has blisters on the bottom of her foot from a flying volcano of chili draining like lava down into her shoe, scorching along its entire path. She is on crutches and is unable to run.

Tracy was so encouraging and kind even when she told me what had happened. What an amazing friend that she broke the news to me gently that she could not run with me — while she was in the ER undergoing wound care on her foot! Even while I was thankful that my friend was going to be okay, I was crushed that she could not run. This was supposed to be fun. Supposed to be an exciting thing to do together a time to cheer each other on, but instead, Tracy will be cheering from the sidelines and finish line, and I’ll be running solo.

This may seem like a trivial example when compared to others, but large or small, we are crushed when plans change. How do we deal with it?  What do we do when goals are blocked? When things are out of our control? How do we press on in uncertainty?

Above my bed I have a small wooden plaque which reads, “I don’t know what tomorrow holds, but I know who holds tomorrow.” I’m going to start there. While allowing myself to be sad that plans have changed, I’m going to believe that God is not out of control. Not a sparrow, or a person, or a pot of steaming chili is outside of His control. I don’t always understand, and when that happens I pray, “I believe. Help my unbelief.”

I’ll run this one solo, for me and for my friend, running buddy,and encourager who has been my cheerleader for the past eight months of training. See you at the finish line, Tracy.