I learn this about myself more every day. I compose prose in the car on my way to work and think about more powerful synonyms for common words when I’m running. Words are my friends and continual companions.

But even more important than my thesaurus, are my eyes. I long to notice what others ignore in life. I want to have sharp vision and a soft heart. I want to see the story.

I had this moment while walking to work last week. I work at a large hospital and have to park half a mile away and cross train tracks to the main building. It’s quite exciting every morning, especially depending on the train schedule! The other day as I was still bleary-eyed in the early morning hours noticed this on the train tracks: 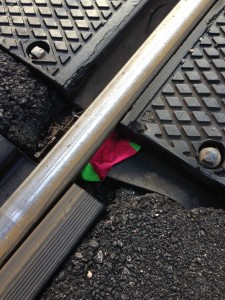 If you can’t see it well. It is a neon pink and green ankle sock crunched down beside the train tracks.

I saw it, strolled past, giggled, and returned to take this image while thinking, “How in the world did this happen?” I wanted to know the back story. Immediately my mind began concocting possibilities.

Was this the left over of a modern-day Cinderella production where the heroine loses a brightly colored sock instead of a glass slipper?

Is this the evidence of a new semaphore system with colored socks instead of flags?

Was someone running away from a masked man who was in hot pursuit? Perhaps her feet were pumping in rhythms faster than her heart rate. When she heard the distant train whistle. Pushing through the aching and protesting muscles, she gritted her teeth and pushed herself faster than she thought possible. The guard arms began to flash and lower. She yearned for oxygen. Just a bit further. She dove, stretched out, diving in front of the speeding locomotive and simultaneously catching her right foot on the asphalt loosing both sock and shoe in the process, but also giving her self some much-needed separation from the cloaked pursuer. And leaving me a small clue to her whereabouts.

Or perhaps it just fell out of someone’s gym bag as she was headed to work just as I was.

The answer doesn’t matter. The ability to see and create the story does!

What do you think happened? What story could you create with this small prompt?