You read that right. While the rest of the world is waiting for the elusive house guest to leave some treats for them, I’ve already seen him.

I heard the commotion. But it didn’t sound like hoofbeats on the roof. It sounded like a long, droning, loop of siren. As if the fire truck was driving in a circle, searching for the fire, but never quite arriving.

But it wasn’t a fire.

He came to my neighborhood. Mounted a top a light bedecked firetruck, with his police escort entourage, was the big guy himself. He came waving, tossing out candy, with a loop of holiday music and the refrain “Ho! Ho! Ho!”

He came driving slowly with a droning siren daring children young and old to come outside and see “what was the matter.” I took that dare — grabbed my camera, donned my shoes, and ran outside. I didn’t realize just how hard it was to chase sound. It is like chasing a rainbow. You move and run and have a goal, but never quite arrive. I ended up running several loops around my neighborhood before finally spotting the man himself. 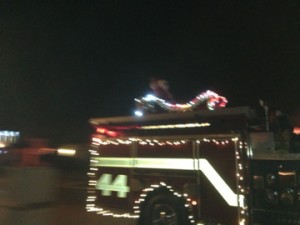 Sorry it looks like a Bigfoot sighting. For a big guy, he moves pretty quickly!

Kids were out in the street screaming, running, and tremoring with joy. One boy was chasing Santa down yelling, “You can’t get away from me! I want my presents!” Another, who didn’t respond to the siren quite fast enough and missed Santa, was inconsolable thinking that now he would have no presents. It was quite the scene.

To me the night represented the joy of spontaneity. No one had planned to spend time outside chasing sirens, or chasing children for that matter. Yet we all did. Dozens and dozens of families’ dinners were interrupted, bedtime routines halted, baths delayed, TVs left off – because Santa came to town. I got a treat just by being willing to do something different, run outside, chase the sound and see where it led me. For someone who plans too much, it was a good lesson. Perhaps I’ll keep my running shoes by the front door from now on — just in case!

Hopefully it doesn’t take me until the next time Santa visits to be spontaneous! 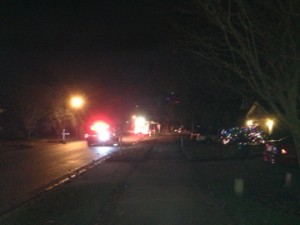 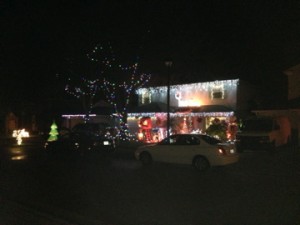