It’s on my business card and everything.

So I read books written by famous authors talking about writing. (Yes, nerd alert!) I recently read, This is the Story of a Happy Marriage” by Anne Pachett 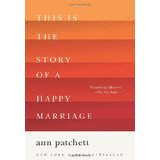 Pachett describes one book signing where she was approached by an overzealous woman insisting someone write her story for her. It doesn’t matter if it is fiction or memoirs; people think that writers write. That the idea is the hard part, but the mechanics are minimal. That it’s easy. That words just flow out of our fingers as we sit in some sort of trance allowing the magic to happen. (Note sarcasm!) Pachett tried kindly, but repeatedly to dismiss the woman before resorting to  an underhanded technique– telling her the writer at the next table might be interested in her story!

I’m a writer. I do have epiphanies and moments where the ideas come to me. But I have far more times that I sit and work and rework a sentence, use my thesaurus, and ask for editing assistance until it’s just right. I practice writing. I craft sentences in my head while stuck in traffic. I write down quotes in books I’m reading that are beautiful. I’m a writer. I regularly practice writing.

Practice is the prerequisite for inspiration.

What is your craft? How are you practicing to be ready for when inspiration strikes?