Lately I’ve been ruminating on gnosticism. I know, I’m weird. Probably most people don’t even know what that is, but the fact of the matter is, it’s all around us. What is even weirder is how watching Ratatouille gave clarity to my ruminations about gnosticism!

Gnosticism is a pre-Christian idea involving a supreme Archon, eons, progressive emanations from the Archon, Sophia, secret knowledge and other confusing things not totally relevant to our current discussion. What is important is how gnosticism plays out practically. Gnosticism causes people to divide the body and the spirit into separate realms entirely. Then gnostics elevate the spirit and denigrate the body. With this worldview in mind, people must choose how to interact with the body and with creation as a whole. They have two choices: either to become licentious and indulgent, throwing themselves into the realm of the body because it doesn’t matter anyway, or to be ascetic, denying their bodies completely, again because they are viewed as unimportant.

This we can relate to.

How many people have tried to diet? We seem to work better within the realms of “all” or “none”… we find “some” more challenging. We can cut out sweets entirely (asceticism) in an attempt to control the impulses of body. Or we can binge, eating the entire bag of Oreos satisfying every need of the body freely (indulgence). Both options that gnosticism leaves us with are wrong. Neither is a healthy, balanced view of the body or creation. 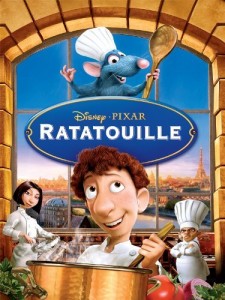 So, you’re probably wondering where Ratatouille fits into this? How much can we learn about the threat of gnosticism from something as innocent as a Pixar film about a cooking rat? A lot, that’s what!

Remy, the main character of Ratatouille, is different from his peers.  His fellow rats are only concerned about caloric intake, binging on whatever garbage they find handy. They care only about quantity, not quality of their food. They represent the licentious gnostics– indulging until they are sick.

Remy is different. He savors food. Sees flavors. Wants to craft and create something worth eating. In this way, he is more human than the other rats. He is actually reflecting the heart of God through his culinary creations.

God is not a gnostic. He who created the body knows, in contrast to gnosticism, that the body is important and should neither be indulged freely nor neglected. God is a creating God. And creation is messy, but oh so worth it.

There is something God honoring about creating because it mirrors His actions. God created matter. He created nature. He created people. He created relationships. Taking the time to cook a gourmet meal. To savor the smells.  To use words like “dash” and “smidgen.” Construct. Build. Fashion. Establish.

To create is one small way we can honor the Author of creation.

So put away the microwave meals and Ramen noodles. Break out the dusty cookbooks. Choose a new recipe. And fight the lies gnosticism tells us about the unimportance of the body… one meal at a time!