It can bring me to tears — both wounded and joyful — with just a few measures of melody.

That happened this morning. A big-time, official, recording artist, Kristian Stanfill, had a special link with my local church as his in-laws are members there. So he and his family were in attendance this morning and led us in a special song during the offering.

Kristian is involved with Passion City Church in Atlanta, GA and is one of the worship leaders at the Passion conferences. To give you an idea of what that means, here was the scene the last time I saw Kristian: 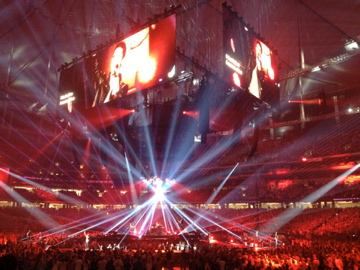 Lights, trinitrons, production, watts, decibels — all portraying the power of the message. He sang In Christ Alone. Not a new song, I believe it’s been around for several decades, but it was an incredibly powerful version. It was beautiful in how it buttressed the message of the conference. Passion is not about the lights or the production, it’s about Jesus.

I got to hear the same song, with the same artist this morning with very different surroundings: 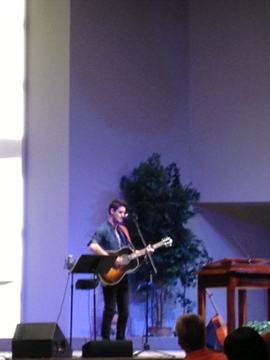 Just one guy and his guitar.

For a moment, I closed my eyes and re-imagined the Georgia Dome and the bigness of Passion. The power that that singing with 70,000 other strangers sounds like. Then I opened my eyes and saw the faces of friends. The people who I cooked a meal for after their baby was born. The women who have prayed with me as I make decisions in life. My church family. Both experiences are majestic. Both are beautiful.

But the most beautiful part to me was that the message was the same. In Christ Alone my hope is found. I appreciate that Kristian knows this truth and that he gives the same focus and effort singing for a few hundred people as singing for many thousands. There is power in his message, in his music, and in this song.