Creativity is scary. I learned this first hand when I told my very first joke. And it fell flatter than a lead zeppelin! We were on vacation  surrounded by family, being prepared to go to Disney the next day. Parents were warning us kids that we had to stay close, hold their hands, and be well-behaved in the big, magical park. I remember thinking, even as an eight year old, that this would be incredibly cumbersome. Having to keep eight people together AND ride as many rides as I wanted to would be too difficult. “It would be easier if we could all just hold hands with one octopus to stay together!” I quipped.
*crickets*

No one responded to my joke. No one even acknowledged it.

He saw what I had tried to do. He pulled me aside and asked how I felt. “Jokes are fun things, but it is one thing to repeat something you’ve already heard. It is a totally different thing to make up a joke that is yours,” he explained. “It’s also is more exciting because when it goes well, it’s your success!” We chatted for a while longer about humor and creativity and taking a chance. I didn’t realize until much later how crucial a conversation that was in my life. I tried something new, it did not go well, but my dad made it okay. More than okay, he made it good. He congratulated my attempt and encouraged me to try again. And it worked because let’s face it– I’m funny! I listened and tried again. Sometimes even now my quips fall flat, but I get up and try again. I owe my delightful and robust humor in a huge way to my dad and this Great Moment in Parenting! Thanks dad!! 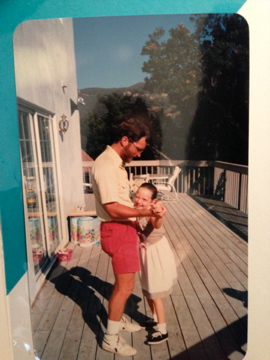