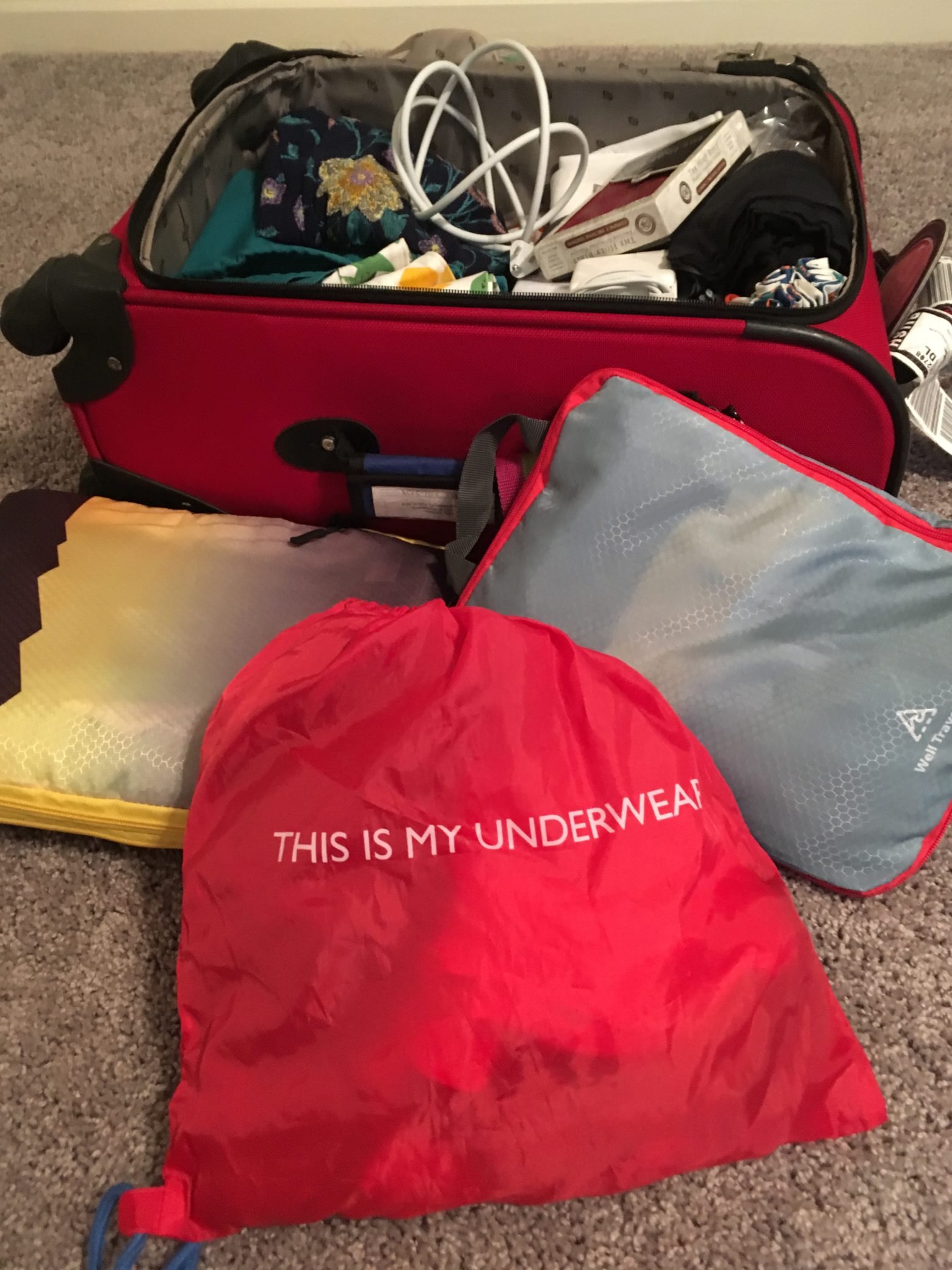 William Shakespeare penned the story of my life long ago. It is called “A Comedy of Errors” and although I don’t have a twin, a shipwreck, or a neck ruffle, this play’s title perfectly describes my experience! My life is a series of challenges, or unfortunate events, or obstacles to climb over, or disconnected items to somehow weave into a story. Pick your analogy! Here’s what my latest errors were:

I flew to spend time with my dear friend, Abby, and her family. Her house is warm, hospitable, full of children, laughter, learning, and nerdy board games. It was designed to be a relaxing getaway.

Error #1: My flight was very full leaving Orlando and there was no overhead space in my area, so the flight attendant needed to check my carry on bag last minute. I handed her my boarding pass and got settled in my seat. She returned 45 minutes later to apologize and inform me that something went wrong and somehow my bag was not checked in under my name. She did not have any additional information to offer: no paperwork, no ticket number, not even my original boarding pass! She tried to look on the bright side and said, “Well, at least your bag is bright red!” In a sea of thousand of other bags, this brought me little solace at the time.

So I went to made a claim with my airline for the lost bag, with no paperwork, minimal data, and a crazy story. As I began my lost bag claim, the rep asked me for the contents of my bag and I calmly recited: a medieval knight costume with shield, a cassette tape costume, a bag that reads “this is my underwear,” a computer charger, lemon shorts, a Bible, and a red hakuna matata shirt. And that was just the first layer of my bag! (I was headed to a 7 year old’s birthday party and had a few costumes in keeping with his theme…I don’t typically travel with costumes. Though I might try it more now!) Vicky, my baggage claim contact, was amused. I figured there was no way to track my bag in the madness that is baggage handling, so instead I entertained Vicky even as I was itemizing my possessions and recording what needed to be replaced immediately.

I talked to several more reps over the course of the day, each offering her service to track my missing things. A kind and attentive airline sleuth named Amber found my bag and had it shipped back to me! So it turned out that my bag was checked in under another family’s name and destination and was headed to space camp in Alabama! The humor is not lost on me! As a child of the shuttle generation, space has always fascinated me, and I’ve been on a space kick even more recently reading multiple astronauts memoirs. My stuff went to space camp and it took three phone calls, two planes, and a courier to get it back to me. But I was only without underpants for one day! Crisis #1 averted.

Error #2: After regaining my bag from space camp. Life was good. I was hanging with some of my favorite children, riding bikes, swinging, and trying to solve the choose-your-own-adventure- game called The Seventh Continent. But on Tuesday, my stomach felt a bit queasy. I excused myself and went to bed early… only to be up until 3 am losing my lunch… and more. I somehow picked up a quick-and-dirty stomach bug. And ate a lot of saltine crackers for 24 hours afterward. While trying to sanitize everything so that no one else caught my emesis catastrophe! This was not what I imagined for my vacation.

Errors # 3-5: Abby and her family also had some special errors this week including a roof leak, a broken freezer, and a normally bubbly toddler, who cried the whole week of my visit. We called in help to fix house troubles, bought ice to save the food as much as possible, and tried to engage the little one to improve her mood. I was sent a video after my return home of little Mystery saying, “I want go to Kelly’s house!” So apparently, we bonded on some level even though most of our conversations were through wailing.

Error #6: There was inclement weather on my day of departure and my flight home was delayed… four times. Putting me at my front doorstep at 4 am instead of the intended 9 pm! But at that moment, all I cared about was sleep and that my luggage had stayed in my possession on this flight! It was a week full of errors for sure..

As Abby was driving me to the airport on the final night, with 2 of 4 delays now known! She hugged me and said, “Man, what a good week!” I laughed. Because it was both hilarious and true. It was a week full of errors, sickness, unforeseen drama, and crises. And yet, it was good. I watched a 7 year old ride a bike for the first time, got to see the special Kelly Lego mini fig go on adventures all week, pushed three little ones on a swing full of laughter, got to see Abby’s growing baby belly, had a 9 year old help me redesign my blog, read a ton of books, learned a new super challenging board game, and outlined a new writing project! It was a good week. It wasn’t smooth, or as expected, but that doesn’t mean it wasn’t good.

Life will always be full of errors, trials, and disparate pieces needing cohesion. But that’s why I am so thankful that we have a narrative that makes sense. No matter how challenging life can be — in some smaller and silly ways like I experience this week, or in larger, life-changing ways like many experience — it is also full of goodness. For the one who trusts in God, your life is a comedy. It will turn out right in the end. He will make every sad thing untrue. He has already started that process! I hope to use my own story, my own errors, and my experience to find the laughter and share the comedy.