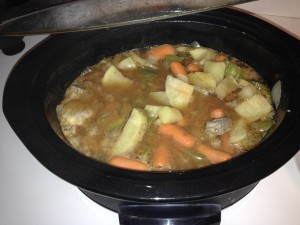 Here is my CrockPot full of steaming hot, perfectly seasoned Hungarian Goulash! I chopped and diced and measured in anticipation of a great meal. But there’s something ugly lurking in the midst of this meal. Apparently, when I added the meat and removed one of those silicon meat sleeves, I did not notice a second sleeve lurking. And so I cooked the meal with said sleeve infiltrating the ranks for half a dozen hours. 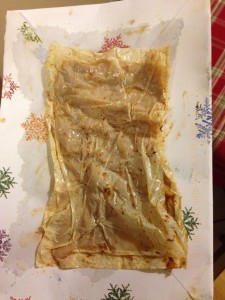 Here it is, burst open and leaking on a decorative Christmas envelope. When I discovered the stowaway (which truly I don’t know how I didn’t see it because I stirred the goulash multiple times!) I had a decision to make. Was it worth risking getting sick to throw out a $20 meal and have to scramble for something to eat that night? I weighed this decision heavily. I hate throwing out food. I hate wasting money. I hate feeling foolish! But I also hate being sick. And in this instance, that hatred won out among the bunch.

It was amazing to me how small a piece of plastic could derail my entire night. I mourned the lost food, money, and time as I threw out my contaminated meal. I grieved my expectation of a delightful meal. I bemoaned my own ineptitude and oversight!

And then I realized that I had to share this. I’m determined not to allow my “public persona” –be in on my blog, Facebook, Twitter or any other social site– be a collection of only my good moments. That would be a record of a relatively small portion of my life. I am determined to share a more balanced view. I make mistakes. I cry. I need people. I add meat sleeves to my food and cook and stir for six hours without noticing their presence! That’s real life. It’s messy and hidden and it takes bravery to let people see the less than glowing moments.

I want to share real life moments. But I promise if I ever invite you over to dinner that meat sleeve won’t be on the menu!

Anyway, I blame cheeky for this whole debacle! 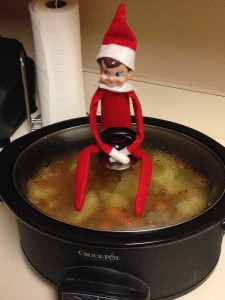